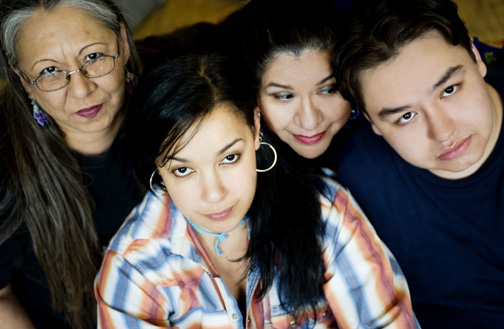 This month, the premiere of Red Ink (billed as “plays-within-a-powwow”) will open at Mixed Blood Theater in Minneapolis. Written by seven Native playwrights, Red Ink explores the issues of contemporary Native life.

The play is written as a series of short scenes that explore many aspects of the Native American experience, from casinos and Native art to reality television shows.

Rhianna Yazzie (Navajo) is the head writer for the play and says she was initally approched by Mixed Blood Theater’s director about writing something for them.

Yazzie said, “Jack Rueler, the artistic director of Mixed Blood, approached me just around the time I was moving from Los Angles to the Twin Cities on a Playwrights’ Center Jerome Fellowship in the summer of 2006. He said that he had been wanting Mixed Blood to reconnect to the Native community and thought that one of Mixed Blood’s signature “multi-playwright” shows would be the best way to do it. He asked me to be the head writer to guide the process along and create continuity amongst all the short plays as well as be the link between the Native community and their theatre.”

Commissioned by Mixed Blood Theatre, the writers of Red Ink have been working on the piece for three years.

“He [Rueler] told me, and all the other writers, to write as if the entire audience were Native, so don’t try to educate, don’t try to put things into context, or change the way you talk, or the subject matter you bring up. It’s been this guiding principle that I’ve kept in mind as we developed the play,” said Yazzie.

Bordeaux and Mixashawn. And is directed by Sarah Rasmussen.

Native. Yazzie said, “It was important to me to push Mixed Blood to

the writing. So now we have Native artists on our design teams. I felt

many Native folks behind the scenes as we do on the stage.”

silent auction and after-performance reception. Tickets for the Special

Event Fundraiser are $30 and can be ordered  online at:

Mixed Blood Theatre Company was founded 31 years ago and promotes

run $11-$30, discounts are available for students, seniors, and groups

of 10 or more.  All performances are at the Mixed Blood Theatre,