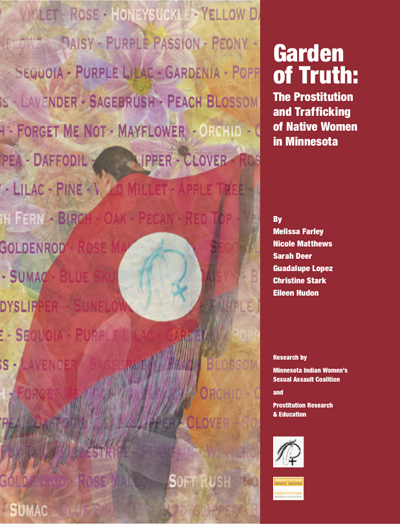 On October 27, the Minnesota Indian Women’s Sexual Assault Coalition (MIWSAC) and Prostitution Research & Education (PRE) released a new report called Garden of Truth: The Prostitution and Trafficking of Native Women in Minnesota. It’s the first-of-its-kind, based on interviews and surveys with more than 105 Native women aged 18-60 in the Twin Cities, Duluth and Bemidji. The report was written by Melissa Farley, Nicole Matthews, Sarah Deer, Guadalupe Lopez, Christine Stark, and Eileen Hudon.

The research for the report was conducted on women involved with both prostitution and sex trafficking in part because of the "multiple legal definitions at the federal, state, and tribal levels and the varying degrees of understanding among those working on social justice issues and the general population" of sex trafficking, according to the report.

The federal definition of sex trafficking is "the recruitment, harboring, transportation, provision, or obtaining of a person for the purpose of a commercial sex act," while the Minnesota statutory definition of sex trafficking is: (1) receiving, recruiting, enticing, harboring, providing, or obtaining by any means an individual to aid in the prostitution of the individual; or (2) receiving profit or anything of value, knowing or having reason to know it is derived from an act described in clause (1).

According to Sarah Deer, one of the authors of the study and a professor at William Mitchell College of Law, a lot of women who have been prostituted meet the more stringent federal definition of sex trafficking, because many of them began prostitution before the age of 18.

"A young woman may be a runaway," Deer  said, "or having difficulty at home. She will be approached by what she thinks is a boyfriend. He shows her attention, buys her presents, buys her alcohol or drugs, becomes a part of her life. She thinks he is the man of her dreams when in fact he’s grooming her, and sells her."

The report offers this quote from a woman who had been, by both federal and state definitions, trafficked: "My dad was very abusive to my mother and I ended up running away to Chicago. When I was 17 I was stranded in Chicago and had to get home to Wisconsin. I went to a party, there were lots of drugs, I got left there, and I was roaming around. A pimp was nice to me, he gave me this, gave me that. Then he took me to someone’s place and he said ‘this guy – age 40 – he’s interested in you’. Then he started hitting me after I said no. I was so scared I just did it. After that I kept doing it because I was afraid to get hit."

Another author of the study, Nicole Matthews (Executive Director of MISWAC) said one of the reasons for including both people who have been prostituted, as well as sex trafficking victims, is in order to not get into the "good victim, bad victim game," she said. "We see them all as victims. We see them both as crimes against victims."

The report shows that violence is very much a part of the lives of the women who were prostituted and sex trafficked. Not only did most of the women (92 percent) say they had been raped, and physically assaulted in prostitution, 79 percent had been physically abused as children, by an average of 4 perpetrators, with more than half (56 percent) abused by caregivers.

The women also suffered from various mental and emotional problems. Sixty-five percent of the women had been diagnosed with a mental health problem, according to the report, including depression, anxiety disorders (including PTSD), obsessive compulsive disorder, bipolar and, less commonly, attention deficit hyperactivity disorder, learning disorders, sleep problems, schizophrenia and dissociative identity disorder.

One of the most startling findings of the Garden of Truth report was that they found that 98 percent of the women were currently or previously homeless. "We need to do a better job at providing housing," said Matthews, "including transitional housing for homeless youth." Particularly, Matthews stated that more housing was needed for Native women.

The report notes past research that links homelessness to poverty. It says Native people are significantly over-represented in the homeless population in the United States, and that when state and private agencies fail to offer women and children shelter, pimps provide housing via prostitution.

Deer said that the loss of a home is tied to the historical precedent of colonialism, with the Native Americans losing their land. Women need, she said, "not just a studio apartment in a bad part of town but a community."

According to the report, the data suggests "compelling evidence of the lack of alternatives for the women, as well as the connection between poverty and prostitution."

Sixty-two percent of the women interviewed saw a connection between colonization and prostitution of Native women. "I’m doing what I can do to survive, just the way Native Americans did what they could to survive with what was given to them by the government: disease, alcohol, violence," one woman was quoted in the report. The authors of the study outline how colonization manifests itself within the context of prostitution in a number of ways.

First of all, there were women in the report that believed prostitution didn’t exist until the colonists invaded. "Our Native people weren’t aware of anything about prostitution until the British came and started raping our Native women and had them as slaves and using them for sex," a woman is quoted as saying.

The report makes the argument that a history of colonization against Native Americans has worsened the problem of prostitution and trafficking of Native women. As an example, more than two-thirds of the 105 women had family members who had attended boarding schools. The relatives who attended the boarding schools were grandmothers (42%), mothers (35%), grandfathers (26%), sisters (17%), fathers (17%), cousins (17%), brothers (14%), great grandmothers (7%), great grandfathers (6%), aunts or uncles (6%), and a daughter (1%). The report states that of the relatives who attended these boarding schools, 69 percent were known to have been abused there, including 94 percent of those being physically abused and 27 percent sexually abused.

Matthews said that the boarding schools led to a loss of cultural identity and a loss of "who we are as a Native people and with each other."

Suzanne Koepplinger, Executive Director of Minnesota?Indian Women’s Resource Center,  said that the Garden of Truth’s findings mirror her own organization’s research about historic trauma and colonialism. "This really is multi-generational trauma we can trace back to the boarding school era."

Koepplinger said the schools were meant to "eliminate Indian people or forcibly assimilate them into main stream culture. They were abused, sexually abused, told they were bad. This created a lot of anxiety, depression and confusion for these kids, who often didn’t know the language. When they became parents they didn’t know how to be parents… that begins the multigenerational cycle."

Deer noted that some of the quotes of the women indicate an enduring racism of the johns that can be very colonial. For example, one woman is quoted as saying, "’A john said to me, ‘I thought we killed all of you.’"

Based on the findings from their research, the authors of The Garden of Truth state that it is "crucial to understand the sexual exploitation of Native women in prostitution today in its historical context of colonial violence against nations."

The authors recommend increasing state and federal funding for transitional and long term housing for Native women and others seeking to escape prostitution. And an increase in Native women’s programs, such as advocacy, health care (both physical and mental) job training, legal services and more research.

In addition, the authors recommend a change in policy to focus on sex buyers, not their victims. They also state that all but 10 percent of the women interviewed did not believe that legalizing prostitution would help them resolve some of the problems in their lives, and only 17 percent believed that legalizing "sex work" would increase their safety.