Suicide is a tragedy that strikes Native American communities disproportionately compared to other ethnic groups, and has been a top 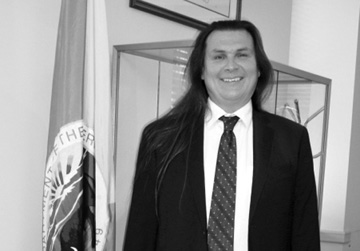 priority on the agendas of many tribal governments. The suicide rate among Natives is the highest of all ethnic groups in the U.S., and new efforts are being raised to bring attention to the problem.
The Indian Health Service (IHS), in association with the Bureau of Indian Affairs (BIA), Bureau of Indian Education (BIE), and Substance Abuse and Mental Health Administration (SAMSHA) are currently undergoing a fact-finding effort to better understand the problem of suicide. Representatives are conducting Suicide Prevention Listen-Ins across the nation to ask what can be done about this issue that affects Native communities so deeply. By talking to the tribal members and leaders who have first-hand knowledge of what they are dealing with, it is hoped that communities can improve upon current efforts and work toward better prevention in the future.
This past November the Midwest Regional Suicide Prevention Listening Session took place at Prior Lake, MN. Kevin Bearquiver, Deputy Director of the BIA said, “the primary purpose of this listen-in is to gather information for a national conference for the tribes.”

That national conference date and location has not been decided yet. It will be the capstone to a series of listen-ins. The questions and concerns raised at each regional conference will be brought to national attention, making 2011 an important year in suicide prevention efforts.
Dawn Wyllie, Deputy Area Director and Chief Medical Officer for the IHS was a first speaker at the Midwest Listen-In. “Addressing suicide effectively requires collaboration between community leaders and families. Suicide is… by any reasonable judgement a crisis in Indian Country,” he said.
Over 45 individuals representing the Midwest attended the listen-in; including tribal chairs and health directors to traditional healers and housing representatives; judges, attorneys, and social workers. What was apparent to those who attended the conference is that suicide prevention means tackling the other issues that affect Native communities. During the discussion members broached subjects that included, but weren’t limited to, gang activity, economic problems, “crisis” situations, and loss of culture.
The issue of funding was picked up by many members at the conference. Though many agreed funding was needed, opinions diverged on where it would be best spent.
An elder from the Mille Lacs band of Ojibwe said, “I’ve always tried to follow tradition. There used to be 25 medicine men (in the Mille Lacs Lake region). Now I am the only one.”
Speakers also stressed the need for traditional healers in Native communities, as well as the need to rela the requirements on grants to include cultural practices and healing methods.
Practical solutions were offered to improve existing programs. The national suicide hot-line was one such program discussed. Clinical psychologist Anthony Stately said, “I think the current national suicide hot-line is ineffective. When a call comes in to the suicide hot-line, the call isn’t necessarily routed to a nearby area.” Stately worries there may not be resources on the ground if the call receiver isn’t local to where the call is coming from and knowledgeable of the cultural nuances the caller may have.
Stately said, “We need to share data, so that we have an accurate view of where our people are at.”
The issue of suicide affects the veteran population especially. Pamela Indivehorn works in Veteran Affairs (VA) and said, “We’ve been working on this issue with veterans for years. The VA has its own national suicide prevention hot-line. The number one method for veteran attempted suicides is overdosing. One solution is pharmaceutical monitoring.”

Other important issues brought up were establishing national media campaigns to prevent suicide, the need for more Native American mental health professionals, and preventing professional burnout. There was even talk of a “National Native Recovery Act” to help the severe socio-economic situation on the reservations.
The IHS encourages grant work to financially supplement tribal health programs and offers assistance in writing grants. It provides grants, training, and area resources to 16 of 34 tribes in the Midwest region. However, tribes have recently tried to compact and contract toward self-determination; and though the increased autonomy for the tribes is beneficial, there are drawbacks to no longer having medical prevention programs under one roof.
Archie LaRose, Leech Lake chair, said that “as community members, we were always there for each other in the past. With the new laws and policies and procedures, we’re being separated. You can throw all the funding you want at us, but we need trained professionals, we need elders who can talk to these kids.”
LaRose also said, “Lets get our professional actors and athletes to come together and tell our kids: Don’t commit suicide!”
Pamela Indivehorn summed up the meeting,“everybody at every level needs to know about suicide. We need everyone to see suicide not as taboo but as something that happens and is preventable.”