Susan Allen is hoping to take newly-elected Sen. Jeff Hayden’s seat in the state House District 61B, after he won a special election to replace retiring Sen. Linda Berglin, who is retiring. The DFL and Labor endorsed candidate isn’t just a fighter for social and economic justice- she’s lived it. As a candidate, she believes in investing in jobs, addressing the achievement gap, reforming the tax system, creating a single-payer health care system, preserving the environment, and saying no to the Marriage Amendment. Her progressive politics, with emphasis on social and economic justice, has strong roots in her upbringing and life experience.

Born on the Ute Reservation in Utah, Allen is an enrolled member of the Rosebud Sioux Tribe where her mother, Helen Allen, was born and raised. Allen’s father, Philip Allen (Oglala Lakota) was an Episcopal priest who was paid half of what the white priests in the Episcopal Church were paid. This inequality caused them to move quite a bit as he worked to change the way the church carried out its Indian work throughout the country. Her family would get to a town where the housing would be substandard, so sometimes they would move to three different places in a year. She went to 20 different schools in 5 different states in the first 14 years of her life.

Allen beat the achievement gap odds-with her parents’ support and through her own negotiation of her education.

Allen says ending the achievement gap for all children is a priority. She believes it needs to start at the community level. "It’s going to take extra attention, resources, and dedication. We need strategies to strengthen parent and community support. People in our district are extremely passionate about closing the achievement gap," she said. 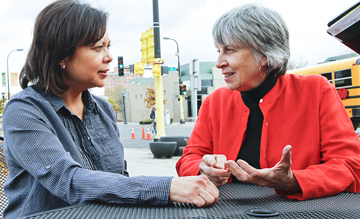 On the legislative level, she believes the state needs to stop diverting funds and delaying payments to schools, and stop relying on standardized achievement testing and punishing teachers.

The way to support and maintain qualified teachers teachers, Allen says, is through certification and training. "We have to be careful that we don’t throw someone into the classroom when they have only 20 hours of training," she says. Also important is for the schools to have a better understanding of the culture, language and values of minority children, according to Allen.

The roots of Allen’s social justice worldview began forming as she was growing up, when the American Indian Movement was gaining strength. In the wake of major social and political changes for Native Americans in the early 1970s, Allen developed a strong, positive identity of being Native American. "At a very early age- maybe 11, 12, years old, I wanted to work for social and economic justice. I wanted to be an attorney," she says. "I saw that in my future."

Living on different reservations, Allen saw extreme poverty. "I understood that we were not going to survive unless we became politically active," she says, "Unless we learned about our culture and issues related to sovereignty, unless we fought for economic and social justice."

At a very early age, Allen struggled with addiction and found the strength to turn her life around. "I saw a future and that I had the capacity to have a better life." She received help from her family and people in the community. "People were already there- they were just waiting for me to ask for help." She’s been clean and sober for 23 years.

Allen eventually went back to school, graduating from Augsburg College with a B.A. in Economics in 1992, and earning a law degree from the University of New Mexico School of Law in 1995, and an advanced law degree (LL.M) in taxation from William Mitchell College of Law in 1999.

For the last 14 years Allen has been an attorney representing tribal governments and tribal entities on a full range of matters, including negotiating tribal tax agreements and other inter-governmental agreements with states. Currently, she is a partner at Fredericks, Peebles and Morgan, LLP. Allen has learned to be tough, but she also knows how to talk with people. "That’s how tribal communities survive- we build alliances, we work with both democratic and republican parties, we’re good at negotiating, and politics is our life." Allen says she’ll bring that strength, and also those skills of negotiating to her work as a legislator.

Allen says of her Minnesota Democratic-Farmer-Labor (DFL) endorsement, "I won the DFL endorsement on November 12 over two male candidates, Nelson Inz a school teacher and Josh Bassias a labor backed candidate, who will both be on the primary ballot because the date to withdraw was prior to the date of the DFL endorsing convention. Both candidates have agreed to abide by the DFL endorsement, to stop campaigning and are supporting my campaign. There is one other DFL’er on the primary ballot, but he is not actively campaigning. If I win the primary, my opponent will be Nathan Blumenshine from the Independent-Respect Party."

If elected, Allen plans to work to involve more Native Americans in the political process. "If I get elected, that would be a priority," she said. She hopes to mobilize communities in state electoral politics- Native communities as well as other communities of color- along issues such as affordable health care, affordable housing, job creation, workers rights and defeating the Minnesota marriage amendment.

Allen says she decided to run for the office "because I firmly believe that all members of our community, including myself, have a stake in the success of our neighborhoods."

The Primary is December 6 and the Special Election is January 10. If elected Allen will be the first female Native American to serve in the Minnesota state legislature.