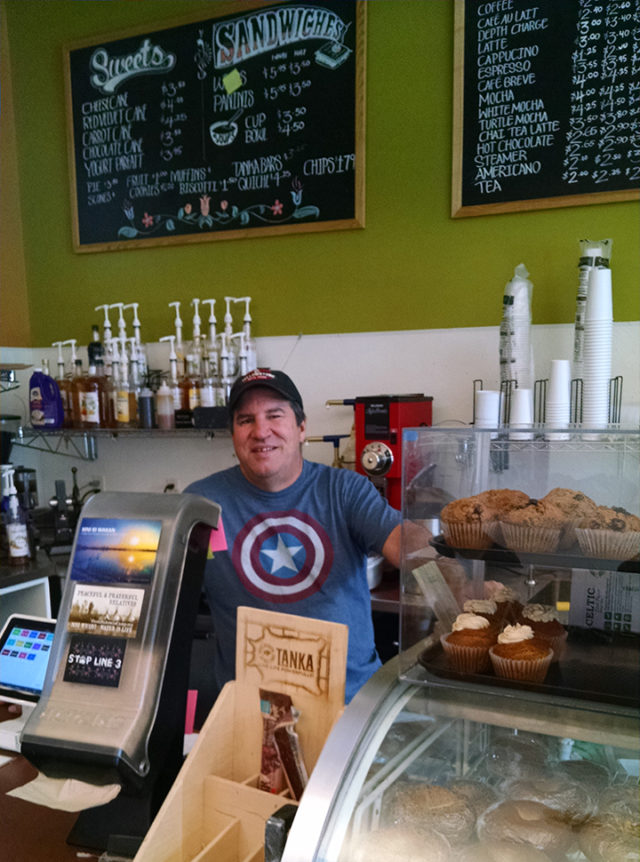 Thirsty coffee drinkers stopping by the Pow Wow Grounds in South Minneapolis know there is much more available there than a cup of the hot stuff, especially if they have a hunger for wild rice foods or could use a friendly fist bump.

“I’ve been ricing for 43 years,” said Robert (Bob) Rice, (White Earth Ojibwe), the owner and operator of Pow Wow Grounds at 1414 E. Franklin Ave. “We harvest it. We process it. Store it.

From that supply, Rice serves wild rice soup daily at the coffee shop. He also offers unique wild rice quiche most days each week unless it is gobbled up before it can be replaced. That’s in addition to the usual fare of sweets offered at most limited kitchen coffee shops around the Twin Cities metro area.

Then, there is a truly unique Friday menu. “Indian tacos” sometimes shortened to “NDN tacos” on the menu board, are essentially tacos wrapped in Indian fry bread.

Rice opened Pow Wow Grounds in the American Indian Cultural Corridor on Franklin seven years ago where it shares space with the All My Relations Arts gallery. He previously had a larger coffee shop in North Minneapolis, his urban home turf. But that bigger site and business was wiped out in May 2011 when a tornado ripped through the area, killing one, injuring 30 others and damaging and destroying property over a large area.

During a recent interview at his coffee shop, Rice spoke about what he enjoys about being a small business owner even though annual revenue has fallen from about $210,000 a year at the larger site to about $140,000 at Pow Wow Grounds.

The Franklin coffee shop became a neighborhood hangout with a mix of area Native American residents and others who simply live nearby or work in the area and want a friendly coffee shop, he said.

“A good percentage of our customers are Native but there are others who just want to meet people away from the office. Or they just come here because it’s become their coffee shop,” he said.

Cultural ties are nonetheless an important part of that neighborhood setting, he added. “I especially like to see elders sit in here talking to younger people about what happened around here in the 1960s, or 1970s, and how things have changed,” he said.

At this point Rice interrupted the interview. A three-year-old girl came in with her mother and sat down at a table next to the owner. “How are you?” Rice asked the smiling toddler before exchanging a fist bump.

Lessons on Minnesota, Minneapolis, wild rice and Native culture for the young girl will have to wait for a later date. But given Rice family traditions and activities, there will be opportunities down the road.

Rice takes Pow Wow Grounds to several events each year as part of a catering business. This allows Rice to expand his menu to include, among other Native specialties, wild rice bratwursts, hotdogs wrapped in fry bread called “Prairie dogs,” and other items that vary from time to time.

Such outings are at special events, such as powwows, while others are at community occasions where education is a major underlying objective.

One such annual event is the Wild Rice Festival at the Harriet Alexander Nature Center in Roseville. The Pow Wow Grounds food truck becomes one of the most popular venues at each year’s event, said Debbie Cash, lead naturalist at the center and chief coordinator of the event.

Cash thought of holding a wild rice festival while driving to work one day, she said, recognizing that it would be a way to celebrate Native American culture, native foods and the natural environment both in the metro area and throughout Minnesota.

Native American artists offer their works for sale at the event, and Northland Visions, 1113 E. Franklin, offers a variety of Native foods and wild berry preserves from a separate stand.

All this ties in with Roseville and the north side of the Twin Cities. It is not well known, but before metro area settlement and urban sprawl the areas north of St. Paul and Minneapolis had wild rice beds in streams and lakes, Cash said.

Plans are already underway for Saturday, Sept. 15, when Roseville will host its 15th annual Wild Rice Festival celebration. While it salutes the wild rice harvest, it opens the way for metro area visitors to learn lessons about Native culture and the natural environment, she added.

Gordy Rice, a retired postal worker and cousin, demonstrates parching (processing) wild rice at the Roseville festival. Bob Rice’s brother, Paul, was nearby and explained wild rice to German visitors and suburban Ramsey County families at this past year’s festival.

The family name of Rice is a bureaucratic coincidence, Bob Rice said. A great-grandfather needed an “American,” or “English” name for some government enrollment records. The Ojibwe family name wouldn’t do.

Bob Rice has provided Roseville with a video report on the Little Earth Ricing Camp that is available on the festival’s home website, www.wildricefestival.org, showing young Native Americans learning about wild rice harvesting and processing methods.

That, too, should help keep a Native American tradition and enterprise alive, one that already runs at least four generations deep in the Rice family.