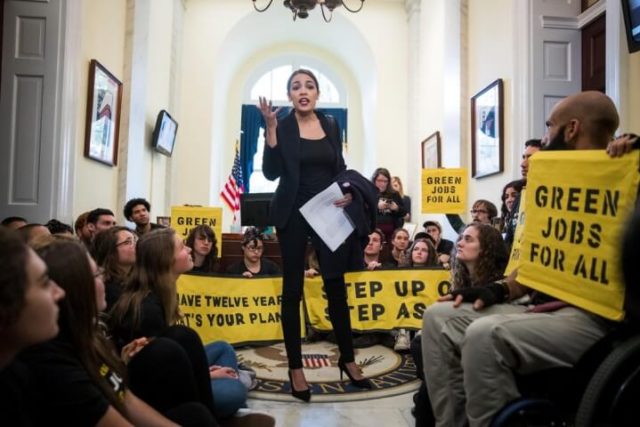 In the middle of winter, the Bears sleep and dream of food, and of adventures to come. That’s the time when we reflect and make plans for the spring. A Bear is also what they call a falling stock market – and that’s what happened this December. As of Christmas, all of the major indexes have lost l6 to 26 percent from their highs this summer and fall. Barring huge gains during the upcoming holiday period, this will be the worst December for stocks since 1931. We have officially entered what investors call a Bear Market.

So, what does the Bear Clan do during a Bear Market? That’s the question I ask myself as I dig into my stored foods – maple sugar, honey, berries, manoomin, hominy, potatoes and meat. We plan for the future, our own Indigenous economies. Nationally, some of this is reflected in what’s called the Green New Deal and the Farm Bill. As we emerge to spring, it seems that Washington is beginning to move towards what we would call the 8th fire.

Green New Deal
This year, Minnesota had the highest voter turnout of any state in the mid term elections. And it shows in some small ways. Nationally, despite heavy voter suppression and a bunch of other monkey business, we elected some young visionary leaders, including those talking about a Green New Deal which will capitalize the next economy.

Incoming Representative Alexandra Ocasio-Cortez, D-N.Y., has called for a “Green New Deal” to get the country off fossil fuels by 2030. Her leadership is joined by allies like the Native women just elected to Congress; Deb Haaland (NM) and Sharice Davids (KS), and by Ilhan Omar from Minnesota, the first Somali American elected to congress.

The Sunrise Movement is a new generation of leaders and the shakeup in Washington is just beginning. The plan looks to address the failing infrastructure in this country, whether it’s the water crisis of Flint Michigan or the aging powerline which caused the latest fire in California. The plan seeks to employ people in jobs that matter for the environment and basic human needs.

Support for the Green New Deal is showing signs of becoming a litmus test among lawmakers who may run for president. Some elements include: Government-led investment in energy and resource efficiency, as well as reusable energies and microgeneration; Low-carbon infrastructure redevelopment in order to create jobs; A directed tax on the profits of oil and gas companies with proceeds being invested in renewable energy and energy efficiency; curbing corporate tax evasion; and a Global Marshall Plan initiative to finance the transformation. Sounds sort of dreamy, right?

Well, it’s happening here on White Earth, on Red Lake, and throughout the north as Indigenous people lead. In the Twin Cities, the Little Earth Green Zone represents a Community’s vision for the future, where local jobs and green space make life beautiful, and energy is local – all important in a time of climate change and chaos. While state leadership on climate change and the Green New Deal has been lacking, tribal organizations and governments continue to move ahead.

Here at White Earth, Akiing, a subsidiary of Honor the Earth, will bring a solar thermal manufacturing factory on line, offering solar thermal panels nationally, straight outta Ponsford. The Red Lake Tribe continues to move to more solar, and the Shakopee Mdewakanton Sioux Community continues to expand its renewable and food system work. Tribes are looking at climate change, and every tribe is looking at renewable energy. As investors flee from fossil fuel stocks (over $6 trillion divested thus far) there will be opportunities to invest in tribal renewable projects, particularly as the world looks upon Minnesota as a battle ground over the choice between fossil fuels (Line 3) and the next economy.

Farm Bill Brings Home the Hemp and the Food
The Notorious FB, the Farm Bill, was signed into law by Trump in late December. The bill includes about 63 provisions for tribal governments, focused on food production, food security and infrastructure. Kudos for hard work on this goes to a coalition and the leadership of the Shakopee Mdewakanton Sioux Community which organized the Native Farm Bill Coalition as part of the tribe’s Seeds of Native Health campaign in the fall of 2017. Since that time, 170 tribes have joined the effort.

“This is really one of the first times where you saw a large number of tribal governments coming together speaking with one strong voice and being able to get a substantial number of changes,” said Colby Duren, executive director of the Indigenous Food and Agriculture Initiative at the University of Arkansas.

Working together, we can do so much more. And there will be food for many generations of bears.

Some Farm Bill changes include allowing tribal producers new parity in access to USDA programs, and creating a pilot project program in commodities. “What that really allows is [for tribes] to be able to say. ‘What are the types of foods – traditional food, healthy food, locally produced foods – that we want to be able to have our citizens have access to in these food programs,’” said Duren. “Those are different things that can really help build our tribal food economies, because you’re helping to be able to support the producers of the food and able to get healthier foods and locally produced foods to the people who are using those programs.”

The Bill requires the USDA to establish alternative tribal programs for its Environmental Quality Incentives Program and Conservation Stewardship Program and establishes a demonstration project to allow tribes to manage federal forest and Bureau of Land Management lands adjacent to reservations.

There will also be more opportunities for tribal colleges to access agriculture research funds, and tribal governments will be allowed to join with states on international trade delegations. As markets increase for organic and Indigenous foods, all of this will bolster tribal economies.

In addition to food, hemp is explicitly removed from the list of federally banned drugs under the Controlled Substances Act and legalized in the Farm Bill.

Native people have a long history with hemp. Traditional weavings for centuries have been made with what’s called Indian hemp, and decades of tribal hemp production have suffered from bans. Today, as hemp grows in the US market – the largest hemp market in the world – tribes can be at the table. Hemp Business Journal estimates the total retail value of all hemp products sold in the United States to be at least $688 million for 2016.

The data shows that the hemp industry is growing quickly, and according to Sean Murphy, the Journal’s founder and publisher, sales are projected to be nearly $2 billion by 2020. The surge is expected to be led by hemp food, body care and CBD-based products. On White Earth, we expect to do all of these, plus fiber.

That Moment in Time
We know this is a moment in time in Minnesota and our world. As the United Nations tells us that we have 12 years to drastically reduce carbon emissions, communities and newly elected leadership take up the challenge. Now would be an excellent time to prepare our communities for climate change.

In this moment, as described by our prophets a thousand years ago, we move to the Green Path. That Path is the 8th Fire. Some people will make a future based on the stock market, some will take that future in hemp, solar panels and manoomin.

In Washington, the power which elected new leadership moves towards the Green New Deal; we will see what Minnesota does, but the tribes will move ahead regardless. And for now, as the Bear looks to the world outside, we will make plan the leaders can follow.