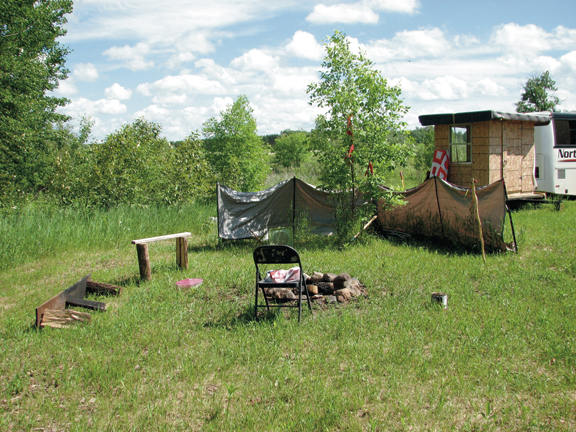 Since 1949, Enbridge Energy has been transporting crude oil through its more than six pipelines from Alberta, Canada through northern Minnesotan reservations and across the US. These pipelines, which transport tar sands oil, pass directly through the Leech Lake Reservation, the Fond du Lac Reservation, and the Red Lake reservation.

Through the combined efforts of the Indigenous Environmental Network (IEN), MN350.org, and the Sierra club, Marty Cobenais of IEN began an encampment on the Red Lake reservation to halt the current pipelines running through tribal land, as well as stop the expansion of said pipelines.

On June 26th, members of MN350.org, an advocacy group committed to climate change, organized a bus tour to the Red Lake reservation to see, first hand, the pipelines that run through the lakes, marshes and vast stretches of land.

Cobenais served as the tour guide as we were lead from pumping stations to the tank farm in Clearbrook. We stopped at the site of the 1979 oil spill, and walked along exposed pipelines –  both on and off the reservation. Our last stop was the encampment.

Across from the lake and directly off the highway sits a trailer, the frame of a tipi, and a fire pit. All of which sits in a large clearing on top of the four original pipelines built in 1949. The spot was chosen because it was a spot where maintenance was conducted on the pipelines and it is Red Lake Reservation land. 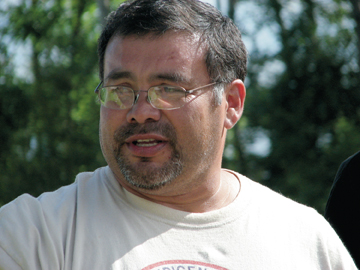 The encampment was born out a belief that an administrative ruling exists which dictates that if there is a permanent structure on top of the pipeline then the pipeline must be shut off and removed. The ultimate goal, “… they still owe us the restitution for 64 years,” Cobenais said.

With the aide and support of some Red Lake tribal members who are committed to the cause, the idea came through, “No great planning, just luck,” Cobenais, said.

One local, Alex Neadeau, has been a mainstay at the encampment and says of the experience, “it’s been a challenge with the elements. I went a little stir crazy but it’s pretty positive and a growth experience…I hope more people become aware of the oil and the damage we’re doing to the earth.”

Lois Norrgard of MN350, explained further that “we just have to keep getting the word out about this because up until now, only a few people have been looking at this issue and Enbridge has been able to get a lot of stuff done under the radar and we can’t allow them to be hidden that way anymore”

“Enbridge is of concern to us because it comes through Minnesota, we’re the huge conduit. We’re like the beginning and once it leaves Canada its coming to Minnesota so that’s why Marty kept saying if we can stop it here we help a lot of the United states and other parts of the world” Kathy Hollander explained, citizen advocate for MN350.

Oil sands, commonly known as Tar Sands, are derived from sand or dirt through one of two processes: In-situ mining or surface mining, which take place in Canada. Both processes use hot water to separate the oil from the sand/dirt and either one of these methods destroys water and land. After separation, it is transported through the pipelines to refineries but Enbridge does not own the oil, they own the pipelines that transport the oil. 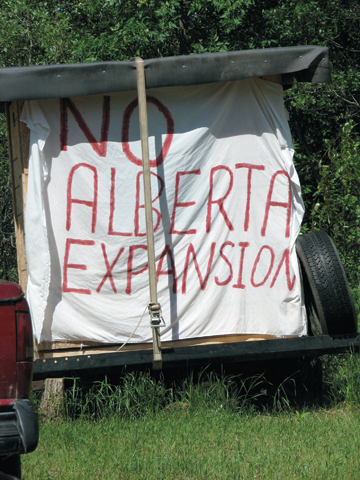 “But a simple way to say it is from well to wheel, the moment its taken outta the ground to the time that we’re driving it in our cars, we know that its between 14-20% more carbon emissions in tar sands oil rather than conventional oil” Hollander explained.

These pipelines run under highways, lakes, marshes across northern Minnesota and are mere feet from the Red Lake High School and the dangers involved with the mining and transport of tar sands is extensive: “We maintain, the environmentalists, that all pipelines will leak eventually. Some pipes are bad steel. Some pipes have been cracked in transit because … they vibrated a little bit so they had hairline cracks, not every pipe in the world. The welds are bad, different things can go wrong and we’re just saying we don’t think they’re safe. So lots of things can go wrong and that’s why we think it’s too dangerous to have this coming through northern Minnesota because we love our state. I think we’re very proud of our environment and the last thing we want is for an oil spill,” Hollander said.

However, Enbridge maintains the safety of their pipelines: “We have an extensive integrity and maintenance program. We do extensive outreach programs with landowners, emergency officials, politicians, etc. We have 24-hour emergency control systems, which are capable of shutting down the pipeline within minutes. We put a lot into preventing damages,” Becky Haase said, Stock Holder Relations Specialists of Enbridge.

While the environmental issue and safety of the pipelines is debated between each side, these concerns are not persuasive to the Red Lake tribe who do not support the encampment and the stance against Enbridge, “they say we’re taking the wrong approach and tactics on this. I think that were bringing attention to it so that it actually probably helps the tribal council get Enbridge to the table to even talk about it and try and figure something out,” Cobenais said.

Enbridge is aware that there is opposition to their pipelines, “There is a protest going on. It’s a third party…they are public tribal members… we are in negotiations with the tribal council. There’s a long history with that particular piece of land.

We’ve continued to work with the tribal council to resolve any ownership questions they may have,” Haase said.

Meanwhile, the Public Utilities Commission, a board that decides permitting for pipelines, or the certificate of need, would need to give Enbridge permission to expand it’s pipelines within Minnesota, has approved Enbridge’s plans to expand the capacity of the Alberta Clipper pipeline on Wednesday July 17.

However, the fight against the oil pipelines continues and MN350 plans to host more tours into Red Lake. The encampment, and the stance against Enbridge, represents a duel stance for Indigenous rights and environmental rights and it is bringing together organizations from both sides.

There are ways to help from the cities and especially for those on the Red Lake reservation, help at the encampment is needed and it is an exercise of their tribal rights to stand against the pipelines, as Cobenais stated, “We have our own real true sovereignty so lets do this. Lets stand up. We have tribes in the Canada, from far away, that are supporting more than even our own our tribe is. But we need to get more Red Lakers out here… we need to make this Enbridge fight a national fight, more like Keystone you know, because we need to make it so we won’t be the escape clause.”