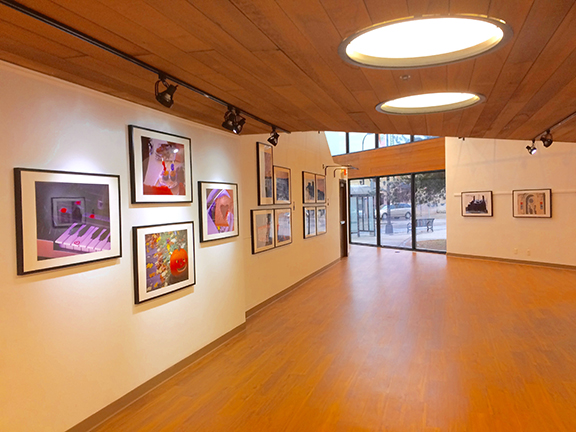 At this very moment there are four pride-inducing art exhibitions in South Minneapolis that are showcasing the rich and abundant visions of Native artists. On Friday, December 4th two exhibitions opened to the public, kicking off an Arts Crawl along Franklin Avenue’s American Indian Cultural Corridor.

Two Rivers Gallery and All My Relations Gallery are two galleries situated within earshot of each other. Further along Franklin Avenue the Minneapolis Institute of Art participated in the Arts Crawl by keeping the museum open late for a tour of the Native American galleries and for the exhibition “Arriving at Fresh Water.” Lastly, Intermedia Arts on Lyndale Avenue is hosting an exhibition titled “Dimensions of Indigenous: Storytelling.” Below is a potential art literary that can be used as a guide.

Stop 1: “What Brings Us Together”

After a several-year hiatus Two Rivers Gallery re-opened its door in May 2015 and is already turning out strong programming activities and exhibitions. “What Brings Us Together”, Two River’s current exhibition, is presented in partnership with the Minnesota Historical Society and features the photography of six teenage artists. Austin Verley, Wihinape Hunt, Esmarie Cariaga, Elizabeth Santana, Ivan Mckeithan and Lupe Thornhill committed ten Saturdays to developing bodies of work that range from intimate, domestic settings to political images of resistance.

About the Two Rivers Gallery’s distinctive programmatic offerings, Gallery Director Maggie Thompson said, “My dream is for it to become a hub for art and culture, a place where artists of all levels and of all ages are welcome.”

This dream isn’t a lofty vision of distant future plans for the space but is actively happening. Thompson said, “Right now we are partnered with the First Gift, where community members, mostly Native women, work together to craft baby moccasins for Native babies born at Children’s Hospital. This takes place every other Monday in the gallery. There is a community sewing bee once a month for Emily Johnson/Catalyst’s Stargazing Project in the space, where community members are coming together to hand stitch a 4,000 sq. ft. quilt for community stargazing and dance performance premiering in spring of 2017… And, we hope to be starting up an art space in the basement of the MAIC, providing a room for workshops and artists to have space to work after the new year. We are also interested in displaying, showing all forms of art, not just fine art, but dance, theater, music, spoken word, etc. We had a dance workshop with Maura Garcia and have held auditions for Missy Whiteman’s film ‘The Coyote Way.’”

Located in the Minneapolis American Indian Center, Two Rivers Gallery is well-situated for this welcoming model of inclusion and partnerships across fields and interests, after all the center was created with these ideas in mind. Creating a setting that is activated by participants is going to be the major strength of the gallery going forward.

Stop 2: “Re-riding History: From the Southern Plains to Matanzas Bay” 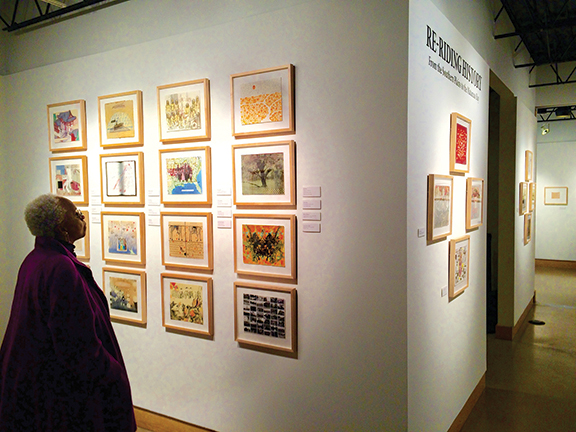 Curated by Emily Arthur, Marwin Begaye and John Hitchcock, Re-Riding History is a traveling exhibition where contemporary artists were invited to create works in the fashion of ledger art, an art form that sprung up in the face of horrific US policies of the forced removal and imprisonment of Native Americans.

The curatorial statement says that the project metaphorically retraces the history of seventy-two American Indian peoples who were forcibly taken from their homes in Salt Fork, Oklahoma, and transported by train to St. Augustine, Florida. The United States war department imprisoned Cheyenne, Kiowa, Comanche, Arapaho, and Caddo leaders under Lieutenant Richard Henry Pratt from 1875-1878.

Fort Marion was the name of the prison known for aggressive assimilation practices and is the place where Lieutenant Pratt coined the phrase “Kill the Indian, Save the Man” and established boarding schools as an effective tool in cultural genocide.

Perhaps in a symbolic gesture, seventy-two artists were asked to contribute a ledger to the exhibition. This exhibition includes contributions from artists such as Jaune Quick to See Smith, Tom Jones and Edgar Heap of Birds. Re-Riding History didn’t originate at All My Relation Gallery, but several local artists were selected to participate, including Jim Denomie, Jenny Schmid and Dyani White Hawk.

All My Relations Gallery has been operating without a director but the gallery is maintaining an active calendar, such as participating in the Arts Crawl. I asked Heid Erdrich what the community can expect for future arts programming. Erdrich said, “Although I’m just temporarily helping out at All My Relations while NACDI [Native American Community Development Institute] hires a new Art Director, I have a history with the program and I know the gallery is about learning from the urban and regional American Indian arts community on its own terms, while offering an invitation to a larger audience.” 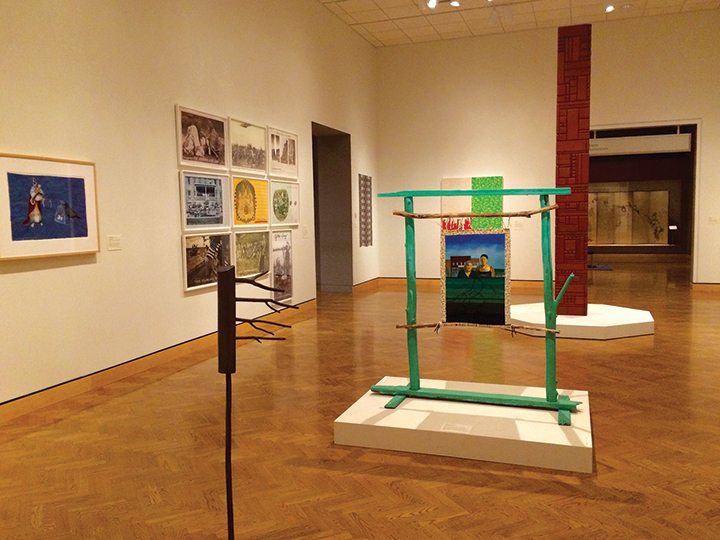 Jill Ahlberg Yohe has been the Assistant Curator of Native American Art at the Minneapolis Institute of Arts (MIA) since 2014. Although relatively new to Minnesota, she hit the ground running and has quickly become an asset to Minnesota’s large community of Native American artists. Aside from re-imagining the permanent galleries,

Ahlberg Yohe’s first exhibition at MIA is Arriving at Fresh Water. The exhibition celebrates many local Native artists and presents a diverse cross-section of artworks produced in our region.

About the museum’s collection and her role in the museum regarding the Native Arts community, Ahlberg Yohe’s said that she will “try to provide as many opportunities as I can to have artists and Native community members talk about Native art, to provide a context where multiple voices are present, and in my own work, to extend scholarship that recognizes the value of Indigenous knowledge and practices in our understanding of art.”

And as for the complicated politics of the designation of Native American Art, such as issues of traditional vs. contemporary, and the politics of authenticity she said, “Mia’s Native galleries incorporate ancient with contemporary, and we aim to display great works of art, from any period. I think many museums focus on historic works of art far too much, and doing this has great consequences, for understanding Native art and for contemporary Native artists and community members. I love all great art, no matter if it is a birdstone made in 2000 BC or a piece of pottery in 2000. I am inspired and blown away by the variety of each communities’ aesthetic systems, and how artists respond and react to these principles and ideas in interesting ways.” 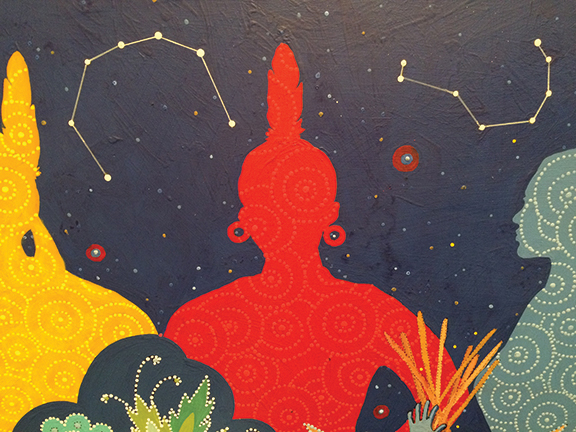 A skip off of the Native American Cultural Corridor is an exhibition on Indigenous storytelling presented by a partnership between Ce Tempoxcalli, Electric Machete Studios and Intermedia Arts. The exhibition is curated by Gordon Coons (Ojibwe) and Rebekah Crisanta de Ybarra.

Each piece in the exhibit is accompanied with traditional indigenous stories, re-emergence stories, creation and re-creation stories from the Americas. Similar to the Re-Riding History exhibition at All My Relations Gallery, Dimensions of Indigenous relies on a similar format for each work of art that is reimagined by each artist.

The exhibition, similar to the afore mentioned exhibitions, presents bridge-building partnerships and a desire for radical inclusion. Coons said the idea for this exhibition came out of a longer, pre-existing conversation with co-curator, Crisanta de Ybarra.

“The idea for Dimensions of Indigenous: Storytelling came from my collaboration with Rebekah Crisanta De Ybarra. We have participated together in various art ventures for over the past four years. During our discussions about exhibiting together, the show of storytelling from the Americas was born,” said Coons.

Dimensions of Indigenous and What Brings Us Together at Two Rivers Gallery are slated to close mid-January. All exhibitions are free (donations appreciated) and open to the public.