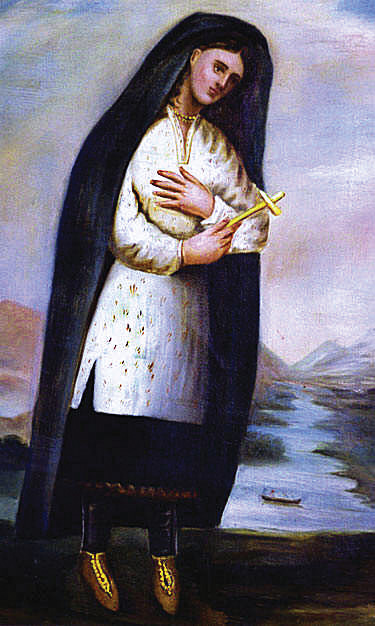 Pope Benedict XVI, issued a decree in December 2011 saying that the Blessed Kateri Tekakwitha will be among seven new saints to be canonised by the Vatican, with the ceremony expected to take place in 2012.

Benedict decreed that the curing of Jake Finkbonner (Lummi Tribe), a six-year-old boy in Washington, of a flesh-eating virus in 2006 was a miracle directly attributable to Tekakwitha, more than 330 years after her death. This makes possible the canonization of the first American Indian saint in the Catholic Church.

The Vatican decided Jake’s recovery was a miracle that is beyond the explanation of medicine and that could be attributed to the intercession on his behalf by Blessed Kateri.

Doctors who treated Finkbooner agreed that it was a miracle, saying they thought the boy would going to die. According the an artice in the Tuscaloosa News,  Monsignor Paul A. Lenz, the vice postulator for the cause of Blessed Kateri, said, "They didn’t think any of their medical expertise was the cure," he explained. "They thought every night he was going to die."

Finkbooner fell and bumped his mouth in the closing moments of a basketball game in 2006. Necrotizing fasciitis, or Strep A, invaded his body and bloodstream through the small cut, and the bacteria raced across his cheeks, eyelids, scalp and chest as doctors worked to stop its spread.

They surgically removed his damaged flesh every day for two weeks and put him in a hyperbaric chamber to deliver oxygen to his body and stop the spread of the infection. He spent nine weeks at Seattle Children’s hospital, where doctors prepared the family several times for what they believed to be the boy’s impending death.

The pastor of the  Finkbonners’ church, urged them to pray to Kateri Tekakwitha on the boy’s behalf, and parishioners of the church were also asked to pray to Blessed Kateri for her help.

Six years after the illness, Jake still bears the scars across his face, neck, and chest. He has undergone 29 surgeries, but is otherwise healthy.

Kateri Tekakwitha was born in 1656 in Ossernenon, now the town of Auriesville in upstate New York, on the banks of the Mohawk River.

She was converted to Catholicism by French Jesuit priests but encountered hostility from her husband and his tribe towards the so-called "black robes", as the missionaries were known.

As a child Kateri survived smallpox, leaving her with pock marks on her face and weakened eyesight. The epidemic killed her parents and left her an orphan, after which she was adopted by the chief of a neighbouring clan.

She devoted her brief adult life to helping the old and infirm and teaching the Gospel to American Indian children.

She was forced to flee to an American Indian Christian community in Quebec, where she took a vow of chastity and devoted her life to prayer and penance. She died in Canada in 1680 at the age of 24.

It is said that Kateri’s smallpox scars vanished at the time of her death, causing Pope Pius XII to declare it an authentic miracle in 1943. There are also claims that many pilgrims at her funeral were healed, and  that Kateri appeared to two different individuals in the weeks following her death.

The process for her canonization began in 1884. In January 1943, she was declared venerable by Pope Pius XII. In June of 1980 she became the first indigenous person from North America to be beatified, by Pope John Paul II.

Tekakwitha, who took a vow of chastity as a young woman, is the official patron of American Indian Catholics. She is also, along with St Francis of Assisi, the Catholic Church’s patron of ecology and the environment.