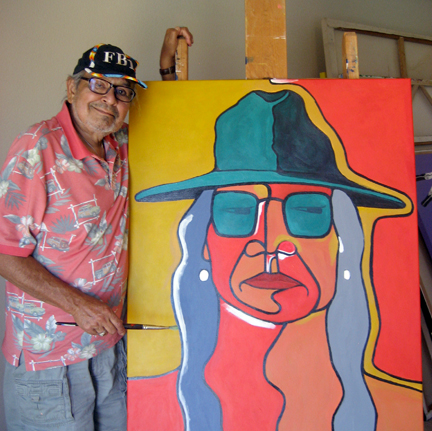 Sam English (Turtle Mountain Band of Chippewa), a renowned Native American painter and activist based out of Albuquerque, New Mexico, is at the forefront of a movement to create the National Native American Healing Center Through the Performing Arts. English envisions the Center providing spaces for art workshops and studios in areas such as writing, dancing, sculpting, and wood-carving. He also sees the Center as the potential drop-in facility for people on the path to sobriety, a coffee shop and restaurant, and a green house.

In a concept paper for the Center written by Elizabeth Belcourt, a social work professional, the center is described as "an organization that will promote healing with integrity and [a] culture based approach utilizing the art form of Native American people." This goal will be realized by using art to "identify who we are as Indian people and address the historical trauma that has taken place throughout the centuries, and is current in our daily lives."

"Nothing’s excluded from this movement," said English. "We need to have some choices about living life like everyone else has."

The Center was incorporated as a 501(c)(3) nonprofit organization in 2002, but securing funding and identifying a location are still in the early planning stages. Ideally, English would like to see the Center based in Albuquerque or somewhere in the Midwest. Kathy Samson (Manitoba Metis Federation/Ojibwe/Opasquiak Cree), is English’s artist agent and foresees the Center eventually growing to encompass multiple sites nationwide. In order to fund the site initially, English plans on selling 65 original paintings he created for Native American programs and conferences in the thirty-some years he has been a practicing artist. English as donated the use of many of his images to Native organizations over the years, including local organizations like Mending the Sacred Hoop Technical Assistance Project in Duluth; Minnesota Department of Health’s Leech Lake Youth Division in Leech Lake; and the Great Lake Inter-tribal Council in Lac du Flambeau, WI.

Each original ­painting will be sold for $25,000. Prints of the conference posters are also for sale.

The inspiration for the National Native American Healing Center Through the Performing Arts comes from English’s own battle with alcoholism, as well as his experiences traveling throughout Indian Country as an activist and artist.

"Indian people have a lot to overcome – a lot of it’s a direct result of colonization," said English.

English grew up in the small town of Ignacio, Colorado. His father worked for the Bureau of Indian Affairs (BIA) and was the product of BIA boarding schools. As a result of these assimilation practices, English did not grow up with a strong foundation in his culture.

"I didn’t know anything about being Indian," said English of his childhood.

Despite not becoming a professional artist until he was 39 years old, English had long fostered an interest in art. He drew and painted from a young age, but kept most of his work to himself until he was in his early twenties.

"I’ve wanted to be an artist all my life," he said.

In 1965, English relocated from Colorado to the California Bay Area, where he became involved with other Native American artists and the National Indian Youth Council.

"American Indian people were just becoming aware of who we were and our histories," said English of that time period.

He cites the American Indian Movement and books like Custer Died for Your Sins: An Indian Manifesto by Native American scholar Vine Deloria, Jr. for helping him reclaim his cultural identity. Even though English had discovered this new community of Native American artists and activists, he was unable to fully realize his goal to become a professional artist because of his alcoholism. He was terminated from positions with Indian Health Services and the BIA, as well as never finishing his college degree. He even turned down the opportunity to pursue a Masters Degree at Harvard University because of his struggle with alcoholism.

"I was at the bottom of the heap," he recalled of his binge drinking.

After being in and out of 18 substance abuse treatment programs in five different states, English finally got sober on December 10, 1981. At this same time, he opened his own art gallery in Albuquerque, New Mexico and helped start an Alcoholics Anonymous program specifically for Native people. 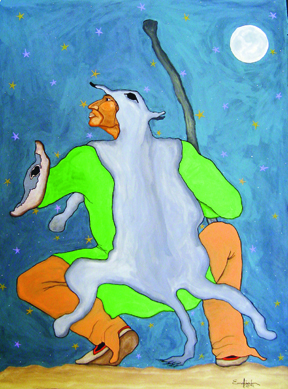 "I know there are programs out there, but they’re not effective at changing our people," said English.

English attributes the lack of success of many mainstream substance abuse treatment programs to their purely intellectual engagement with addiction, as well as the fact that they often do not seek the input of Native American people themselves.

Through his work as a recovery activist, English sponsored several art workshops in collaboration with the United States Department of Justice. At  these workshops, he was able to see art’s potential as a healing tool for Native people.

"Art sparks a new identity, a new way of thinking about the things an Indian can do in life," he said.

English began collaborating with Native American PhDs, professionals with Masters of Social Work degrees, and a psychologist to discuss plans for the Center. The group plans to continue meeting and involving more people from Native communities nationwide in the initiative.

In addition to selling English’s original artwork to raise funds, the group plans to seek out grants and private donors. English estimates $800,000 as the yearly operating budget of the Center. He thinks the project will continue to gain momentum in the near future.

"The inspiration is there, I just need to keep it going and maintain the energy that’s there," he said.

To become involved with the National Native American Healing Center Through the Performing Arts initiative, or to purchase one of English’s original pieces in support of this effort, contact Artist Agent Kathy Samson, at 952-212-3244, or by email at: kathy@kathysamson.com.

In addition to the original paintings, English has also recently released a book entitled The Life, Work, And Times Of An Artist by Samuel F. English and Ann Dallman. Additional original art prints can also be purchased by contacting Samson.