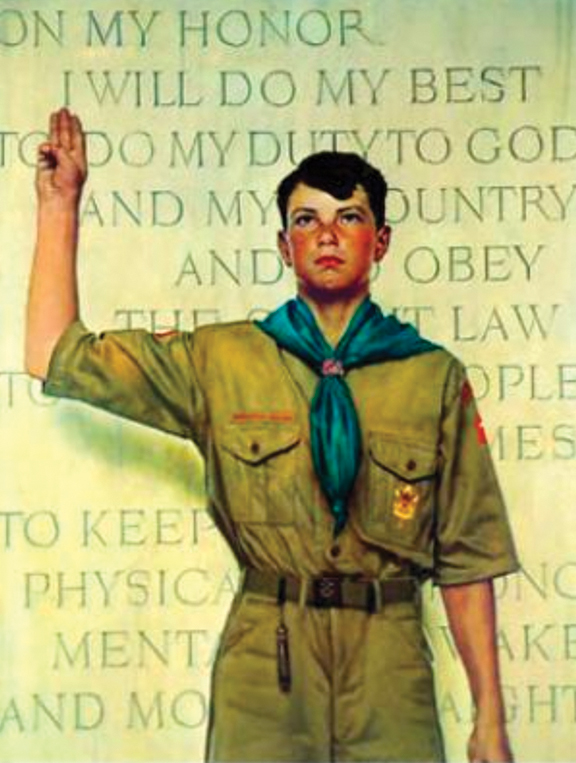 Let’s put it this way, the Boy Scouts are supposed to be good guys. And now they’ve got some challenges. We will add to them. We would like our land back. And, we also think they can apply their skills as Water Protectors, the kind that stands with the Native people for the land, like, Boy Scouts do.

In 2019, the Boy Scouts of America Honor Society, the Order of the Arrow, instituted a new policy:  Scouts no longer would dress up as “Indians” and incorporate imitation Native regalia into two of the order’s more important ceremonies – the Arrow of Light and Cross Over Ceremonies.

That’s a big step and a good one. It should be just the start. After all, cultural appropriation has been pretty much the Lore of the Order of the Arrow since it’s inception by Ernest Seton, well over a century ago. The Order of the Arrow Fraternal Society was created to honor exemplary scouts, and I understand fully why Native people have been your model. We’re awesome.

In the case of the Boy Scouts, the cultural methodology has been problematic. Basically, making up Native ceremonies in a time when Native people continue to be repressed for these same ceremonies, is textbook colonialism. There’s a good way out of this, or a way to begin restorative justice. Boy Scouts just join the Water Protectors. We can adapt your skill set, add in some renewable energy, sustainable agriculture and Indigenous land restoration skills, and it will be great. We can even add a badge or two for River Protectors and maybe a badge for Arrests as a Water Protector, and a special order for those who rematriate land. That’s not this essay, however. Let’s talk about real estate.

Indian Lands and Scout Lands
The Indian Mound Scout reservation was established in l9l7 just north of Interstate 94 in Oconomowoc, Wisconsin, 30 miles west of Milwaukee. It is named after the Ho Chunk mounds there on the south side of Silver Lake. That’s just a beginning. That’s what erasure looks like. No one really knows anything about the people upon whose land you camp.

Manypoint Boy Scout Camp is a jewel of the Northern Star Council of Boy Scouts, a 1700 acre parcel owned by the Council after a 2005 merger of the Indianhead Council of Boy Scouts and the Viking Council. The camp website does not mention that the camp sits in the middle of the White Earth reservation. So, on one hand, the Order of the Arrow seeks to honor Native people, and yet the camp itself cannot even speak of us. That’s the problem of erasure.

The Wikipedia entry on the camp illuminates more. “The first occupants of Many Point Lake and its surroundings were Native Americans of the Ojibwa tribe, who gave the lake its name for its many peninsulas. In the 19th century, the lake and woods which surrounded it were occupied by French fur traders and loggers, who harvested the abundant natural resources….Many Point Scout Reservation was founded in 1946 by Wint Hartman, the first camping director for the reservation, and Boots Hanson, the first camp ranger.”

Let’s do a bit of deconstruction on this statement. The Many Point Scout camp sits in the middle of the White Earth reservation. That camp is on stolen land. Take a look at a map of original land owners, or allottees from l900 or so. PayQuay Cum, Equay Zainze, Naytumaun equay, Lizzie Lyon and lots of Norcrosses. Those are Pine Point families most of them, or now, more likely Native people in the Twin Cities, most likely living North side or in Little Earth. Our people have been systematically dispossessed of their lands by upstanding citizens of Minnesota, the banks, and the state of Minnesota. There’s been no reckoning.

Now to be clear, the Boy Scout Camp is my neighbor. I live on the White Earth reservation near the camp, and have found the most recent caretakers to be gracious to my extended family and Horse Nation Academy as we ride horse through our territory. After all, it is inakiingimin, the land to which we belong. But, for most of the century since dispossession and possession by the Boy Scouts, few Native people have ventured into the camp.

Buckskin Camp and Ten Chiefs are two of the prime camping areas, formerly the lands of Pays Haun Ah Quod Oke Quay (Buckskin camp/ beach), Nay Tah Waush (Ten Chiefs camp/ beach) Ke Che Gah Me We Quay (Voyager camp). Let’s start with an acknowledgement – my Boy Scout friends. And then let’s talk about the context of Land Back, and also leadership development. We do that too – we’re called Water Protectors and now, we need you.

In l981, the White Earth Nation sponsored the International Indian Treaty Conference, the fourth of its kind. We returned in mass to the Many Point Boy Scout reservation. Treaty discussions were led by great leaders like Leonard Crow Dog, Phillip Deere, Pat Belllanger, Russell Means, Vernon Bellecourt and hundreds of Native people came from across the continent to reaffirm relationships and organize to protect our waters lands and culture. Bonnie Raitt and other musicians joined us. I was a young woman, the first time I’d been at Many Point Lake was then.

This summer is the fortieth anniversary of the International Indian Treaty Conference at Many Point and perhaps we should join again. Certainly, the issues have not changed, and the camp is a scant 30 miles from the Enbridge Line 3 Pipeline. We will have to do a bit of coordinating, however, as this summer, in July of 2021, the Many Point Scout Camp will mark a 75th Anniversary and celebrate scouting. One can only hope that in this moment, they will also begin a new relationship with the Anishinaabe on whose land they camp.

The Sexual Abuse Scandal
In 2019, the Boy Scouts changed the directive for the Order of the Arrow, looking to address some of the cultural appropriation of the organization. A year later, they filed for bankruptcy. The 110 year old organization is charged with allowing sexual and physical abuse of scouts by troop leaders. The tragedy is that 2019 court testimony found that the “… Boy Scouts of America believed more than 7,800 of its former leaders were involved in sexually abusing children over the course of 72 years, according to newly exposed court testimony. The Boy Scouts identified more than 12,000 alleged victims in that time period, from 1944 through 2016, according to the testimony…..” according to a CNN report.*

There had been rumblings for a long time about the abuse of the Boy Scout troops, but in 2019, a set of lawsuits rose to the surface, and in 2020, just after the Boy Scouts celebrated their ll0th anniversary as an organization, they filed for bankruptcy.

The Scouts liability is estimated at between $l00 and $500 million. The bankruptcy filing, which came just days after the group’s 110th anniversary, listed BSA assets of between $1 billion and $10 billion. Let’s just be sure that if the Many Point Boy Scout Camp comes up in bankruptcy court, that the Anishinaabe people will have the land returned.

“The question remains if the BSA will make good on their word to do everything in their power to make the tens of thousands of lives they altered better. The BSA failed them once as children. We hope they do not do it again this time around,” attorneys for the victims said.

The Anishinaabe may ask the same question. If a Boy Scout steals your land, will he ever return it? And we may all ask the question, what do those skills you learned as a Boy Scout mean today?

Search for Indian boarding school records gets a boost

Fear/stubbornness kept her from getting routine health screenings