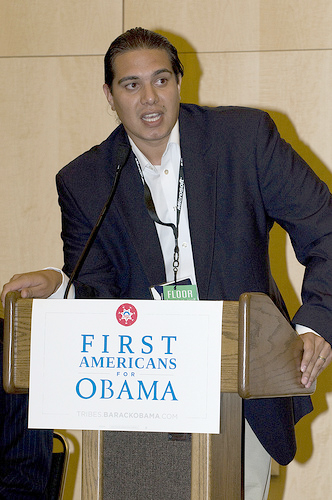 Wizipan Garriott, 28, has been appointed First Americans Public Liaison, a newly created position in resident-elect Barack Obama’s ransition team. The position is aimed at honoring a nation-to-nation relationship with tribes. Garriott’s position on the transition group brings the total number of active Americans serving on it to seven.

Marriott, whose first name means "burden" in Lakota, graduated from Yale University in 2003 with a degree in American studies. He then sent on to work as an assistant to former Sen. Tom Daschle, D-S.D., who has been a key player in the Obama campaign and was recently agreed to lead the U.S. Department of Health and Human Services.

After Daschle lost his bid for re-election in 2004, Garriott attended he University of Arizona James E. Rogers College of Law in Tucson, and obtained a law degree. In 2005, he also helped incorporate the He sapa Leadership Academy, a college preparatory school on his reservation for students in grades eight to 12.

As Daschle became involved with Obama’s campaign, the longtime

politician recommended Garriott to become a part of the effort. Garriott joined the Obama campaign for president as a Native American outreach coordinator in Sept. 2007. In June, he was officially hired as

the campaign’s First Americans Vote Director. His chief objective was

collaborating with tribes and native groups, trying to get out the

Native vote in many states, including New Mexico, Wisconsin, Montana and

Michigan. For us, the campaign has always been about community

can help our own people organize and empower themselves. That’s what

this is all about."

Garriott is the son of Elizabeth Little Elk, who works for the

Rosebud Sioux Tribe in the child and family services arena, and Charlie

Garriott, a teacher at Todd County High School, located on the