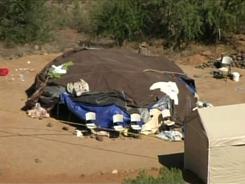 James Arthur Ray, motivational speaker, author and self-help guru offers clients the promise of both spiritual and financial wealth if they sign on to his programs. But the five-day “Spiritual Warrior" course that 50 participants paid more than $9,000 each at attend, ended in 3 deaths and twenty one people being taken to the hospital.

Ray had rented the Angel Valley Retreat Center near Sedona, Arizona. The culmination was the sweat lodge ceremony that ended in tragedy. Ray led more than 50 people, both men and women,  into a makeshift “sweat lodge” on Oct. 8. After about two hours, Kirby Brown, 38, of Westtown, N.Y., and James Shore, 40, of Milwaukee were pulled out of the sweat lodge unconscious, and nineteen other people were taken to hospitals.

Liz Neuman, a 49-year-old from Minnesota dieda week later at a

Flagstaff hospital. She suffered multiple organ damage during the

sweatlodge and was in a coma before she died.

by Ray. An emergency call two hours after they entered the lodge

Twenty-one people were taken to area hospitals with illnesses ranging

from dehydration to kidney failure.  Brown, and Shore died upon arrival

at a hospital. Authorities haven’t determined what caused the deaths.

Autopsy results on Brown and Shore are pending further testing.

during a “vision quest” in the nearby wilderness and afterwards were

Texas resident Beverley Bunn is the first participant in the tragic

deaths. The 43-year-old told the AP in a series of interviews that by

the time the sweat lodge ceremony began, the participants had undergone

days of physically and mentally strenuous events that included fasting.

Within an hour of entering the sweat lodge on the evening of Oct. 8,

Ray continually urged everyone to stay inside. The ceremony was broken

up into 15-minute “rounds,” with the entrance flap to the lodge opened

briefly and more heated rocks brought inside between sessions.

hearing from two sides of the 415-square-foot sweat lodge. Ray’s

response: “Leave her alone, she’ll be dealt with in the next round.”

By that time, Bunn had already crawled to a spot near the opening of

the sweat lodge, praying for the door to stay open as long as possible

between rounds so that she could breathe in fresh air.

At one point, someone lifted up the back of the tent, shining light in

the otherwise pitch-black enclosure. Ray demanded to know who was

letting the light in and committing a “sacrilegious act,” Bunn said.

The account marks a significant revelation in the investigation because

signs all around him that the situation had gone horribly wrong. Until

now, few details had surfaced about Ray’s actions inside in the sweat

Ray led the group in chants and prayers during the ceremony, Bunn said.

bodies and weakness could be overcome.

they are being investigated as homocides, “A combination of

circumstances led to the deaths,” Waugh said. “Whether or not we can

prove a criminal case, that has yet to be determined.”

motivational speaker who tried his hand at very dangerous physical

things, and it was reckless.” The sheriff’s announcement that the

deaths are being treated as homocides, he said, “doesn’t surprise us in

Ray’s spokesman, Howard Bragman, said the sheriff’s use of “homicide”

to characterize the investigation was irresponsible and a rush to

Investigators are looking into the construction of the sweat lodge and

Ray. He is the primary focus of the inquiry but others are being

investigated too, the sheriff said.

A search warrant was served  at Ray’s Carlsbad, Calif.-based company,

James Ray International. Deputies were looking for medical records of

those attending the Sedona retreat, documents on the sweat lodge’s

construction and use, and any warnings of health risks, Waugh said.