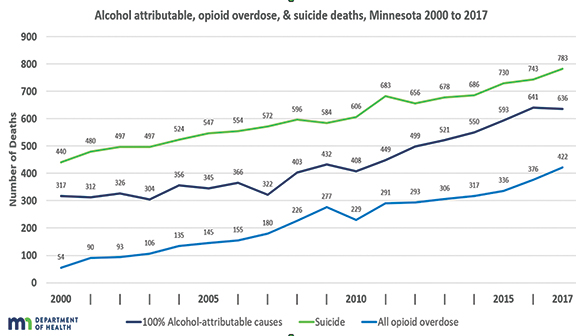 A sharp increase in deaths linked to opioid addiction in Minnesota and especially in Native communities is triggering alarm throughout the state and triggering action on several fronts.

Minnesota tribes have stepped up health services and recovery programs at reservation communities and in the urban Twin Cities. State, local and tribal governments are involved in several lawsuits against pharmaceutical manufacturers accused of promoting the opioid crisis. And Gov. Tim Walz has proposed a state budget includings several items that would help tribes and agencies combat the crisis.

Health officials and substance abuse counselors know that overdose deaths, suicides and deaths from alcohol-related causes are linked. Exactly how, and determining which deaths were intentional or accidental, involve complexities of mental health and social behavior that experts are still working on defining, said Melissa Heinen, an epidemiologist and project director in the Injury and Violence Prevention Section at the Health Department.

It has long been known that Native communities across the U.S. states are disproportionately impacted by drug addiction, alcohol-related deaths and suicides. That is definitely the case in Minnesota, said Richard Latterner, a manager and chemical health counselor at the White Earth Urban Substance Abuse Program, 1730 Clifton Place, in Minneapolis.

“I know when I wake up God will have work for me this day,” he said.
That is no exaggeration. A briefing paper from the Health Department states:
“Minnesota’s crisis with opioid addiction is devastating families and communities across the state and country. Opioids account for more overdoses than any other drug. American Indians are experiencing the effects of the opioid epidemic far more than other Minnesotans.”

This is a national epidemic and an urgent crisis for Native communities. In recent court documents, for instance, four Dakota and Lakota tribes in South Dakota cite statistics showing American Indians and Native Alaskans account for 28 percent of U.S. opioid use disorder patients – or patients being treated for opioid use.

Amidst such alarming data, the Fond du Lac Band of Lake Superior Chippewa opened a Tagwii Recovery Center at 2020 Bloomington Ave. S. in Minneapolis within the past year offering outpatient recovery services for Natives in the metro area.

This is the third chemical recovery and behavioral health services center operated by the band. Fond du Lac has a Tagwii Recovery Center to help members with addition problems at its home base at Cloquet. In 2016 it greatly expanded its Center for American Indian Resources in Duluth for such services.

There are numerous treatment and behavior health programs scattered around the Twin Cities. The Native community in the Twin Cities has three major programs, offering culturally structured substance abuse and chemical dependency services.

The Indian Health Board of Minneapolis, 1315 E. 24th St., is currently doing an assessment of programs and services and is exploring what it will offer for chemical dependency treatment for its Native patients, said Donavan Begay, IHB communications specialist.

Similar, focused programs are offered at and near Minnesota’s 11 tribal communities.
“I am really proud of what the tribes are doing, at home and here in the metro area. But there is so much work to do,” Latterner said.

That was evident when the Health Department issued its report on 2017 deaths from opioids, alcohol and suicides.

“There are many forces driving this increase in preventable deaths, and a key factor is a lack of social connectedness and opportunity,” said Minnesota Health Commissioner Jan Malcolm.

“Things like job opportunities, good education, and social connection each play a role in the health of individuals, families and communities,” she added.

Access to culturally targeted treatment and counseling remains a problem, however, for Native Minnesotans.

Most Minnesotans who enter treatment complete it and show considerable improvement, a Health Department briefing paper said. But it often takes 25 days or more to access substance abuse treatment, it added.

That is what Fond du Lac, White Earth and other tribes are addressing by opening clinics and treatment programs off reservation in urban centers like Duluth and Minneapolis.
There may be more money to support these programs coming through lawsuits.

In its March 18 announcement of the opioid, alcohol and suicidal deaths in a 2017 report, the Minnesota Department of Health noted several items in Governor Walz’s proposed budget that would help Native organizations and local governments with Native populations deal with the opioid crisis.

Among items called for are culturally competent services using traditional American Indian healing, grants to local communities most affected by opioids and suicides, funding for medication-assisted treatment, expanded opioid addiction treatment in correctional facilities, and expanded access to the naloxone drug used to save lives for people experiencing an opioid overdose.