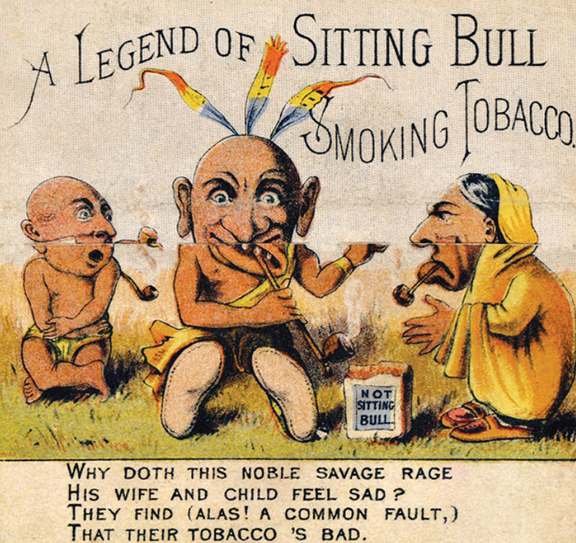 Recently, our country has seen improved understanding of cultural misappropriation. Awareness of stereotypes, protests against racist mascots, and education that cultural imagery in clothing is not appropriate for costumes are just a few examples of changing sensibilities.

As researchers and advocates, we have examined how American Indian culture has been depicted and used to sell commercial tobacco products like cigarettes. Having explored the tobacco industry’s misuse of culture, we can shed light on its role in contributing to commercial tobacco disparities in Native communities. We began by researching historical tobacco industry documents, revealed through legal actions against the industry. Our findings were recently published in the journal Tobacco Control.

American Indians have tobacco traditions from before recorded history. Several plants are considered tobacco and used as sacred medicines by Natives. There are protocols and traditions when using traditional tobacco; smoking only occurs ceremonially, and tobacco is just as often placed on the ground or in water for prayers as a way to give thanks to the Creator.

However, as soon as Europeans arrived in the “New World,” they began corrupting this traditional medicine for commercial purposes. They exported tobacco to Europe, enslaved Africans to pick the plant, and eventually mass-produced cigarettes engineered for maximum addictiveness. Commercial tobacco companies discarded the sacred purpose of tobacco; instead, they encouraged consumers to use it recreationally, as often as possible – and for the rest of their lives.

They also marketed it. Early ads using American Indian imagery were blatantly racist, mocking the cultures they were exploiting. Stereotypes were used for laughs. A 1939 ad depicted a white man wearing a traditional war bonnet and praising his cigarette’s “heap fine flavor.” A script for a 1960s commercial depicted “Injuns” approaching a wagon train saying, “Peace pipe broken. We come to trade for Kents.”

Gradually, the ads softened, but they still portrayed American Indian culture in simplified and stereotypical ways to attract mainstream America. And they still depicted items, such as war bonnets and pipes, that have sacred significance to Indigenous people – making the misappropriation all the more offensive.

More recently, the approach to American Indian symbolism changed again. Natural American Spirit cigarette uses a pipe-smoking American Indian in its logo, and we found the brand uses cultural associations to suggest theirs is a “spiritual” cigarette. Its manufacturers wrote, “We feel tobacco is a powerful herb worthy of the respect it has been shown in American Indian tradition. Our product name, ‘Natural American Spirit,’ was chosen as a sign of respect for this tradition.” A testimonial sent to customers stated:
[The] desire to smoke is as old and natural as humanity itself. It is [the] spirit saying, ‘I need . . . to step aside and get in touch with the peace within.’ . . . [Natural American Spirits] have put the ‘Spirit’ back into [cigarette] smoking—as it should be.

The brand’s sales plan offered their cigarettes in places where customers are more responsive to this type of marketing: health food stores, independent groceries and coffee shops. Responding to criticism of this appropriation, Santa Fe noted it makes charitable contributions to American Indian causes – a common tactic deflecting attention from smoking’s impacts on disenfranchised communities.

The impact of smoking on American Indian communities is tremendous, and results from historical traumas compounded by the tobacco industry’s targeted marketing and deceptive tactics. In Minnesota, for instance, the cigarette-smoking rate among American Indians is nearly 60 percent – four times that of the general population. Native communities also experience inequities and disproportionate rates of death and disease.
We hope our findings will encourage people, Native and non-Native alike, to be aware of what the commercial tobacco industry is doing. Just as the use of Native imagery for costumes and sports mascots is disrespectful, so too is the exploitation of Native traditions surrounding sacred tobacco. Supporting the traditional tobacco practices of American Indians, and refusing to tolerate the offensive marketing of this destructive industry, should be a goal for all of us.

The study can be found at http://tobaccocontrol.bmj.com/content/early/2018/03/01/tobaccocontrol-2017-053950, and you can learn much more about traditional tobacco from the Minnesota-produced documentary “Reclaiming Sacred Tobacco”.